CHILDREN'S FACIAL PROPORTIONS
Children's proportions are different than those of adults: Young children have rounder faces with larger eyes that are spaced farther apart. Their features also are positioned a little lower on the face; for example, the eyebrows begin on the center line, where the eyes would be on a teenager or an adult. As a child ages, the shape of the face elongates, altering the proportions. 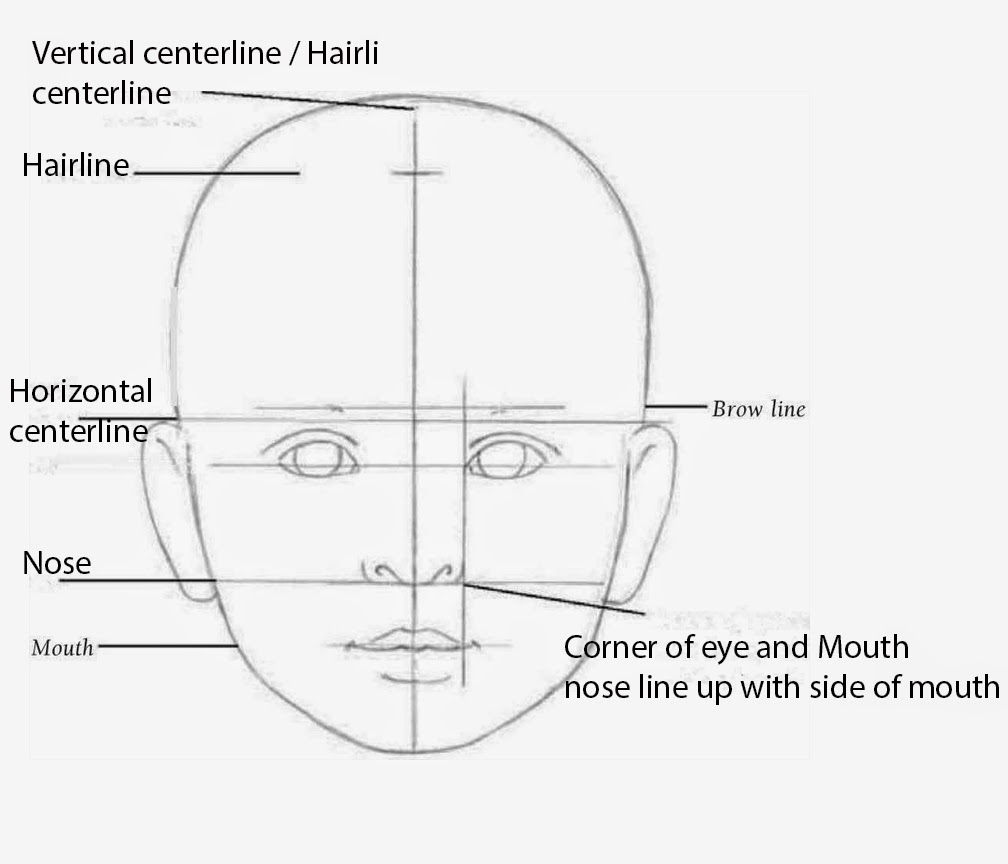 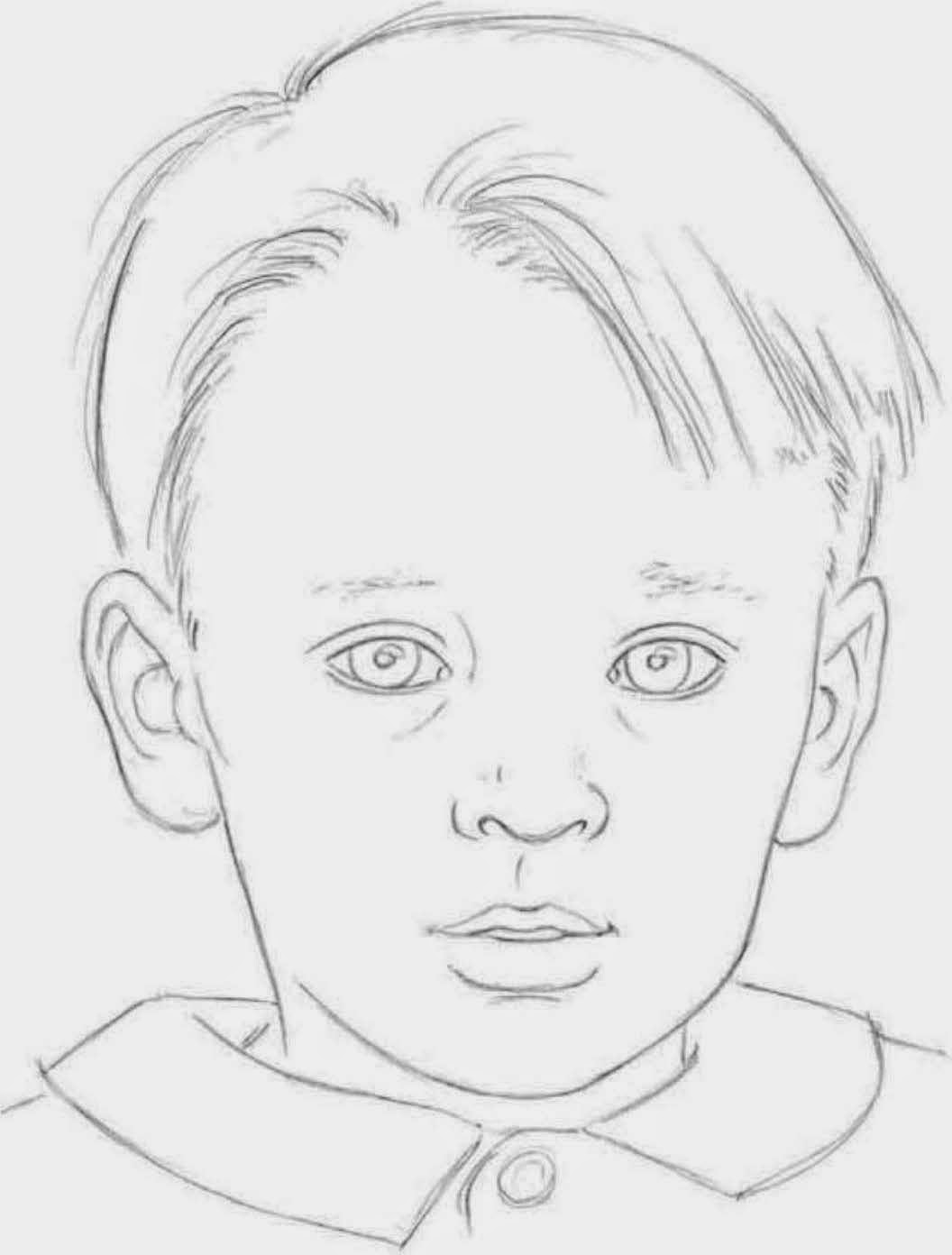 Placing the Features Based on the placement of this subject's features, you can testis mate that he is around five or six years old. The face has elongated enough to shift the brow line so that it lines up with the tops of the ears, showing that the child is no longer a baby. But the eyes are spaced farther apart, indicating youth. The mouth is still relatively close to the chin, which also emphasizes his young age. (See the diagrams at right for more on the shifting of the features with age.)

CHANGING OVER TIME
The placement of the features changes as the face becomes longer and thinner with age. Use horizontal guidelines to divide the area from the horizontal center line to the chin into equal sections; these lines can then be used to determine where to the place the facial features. 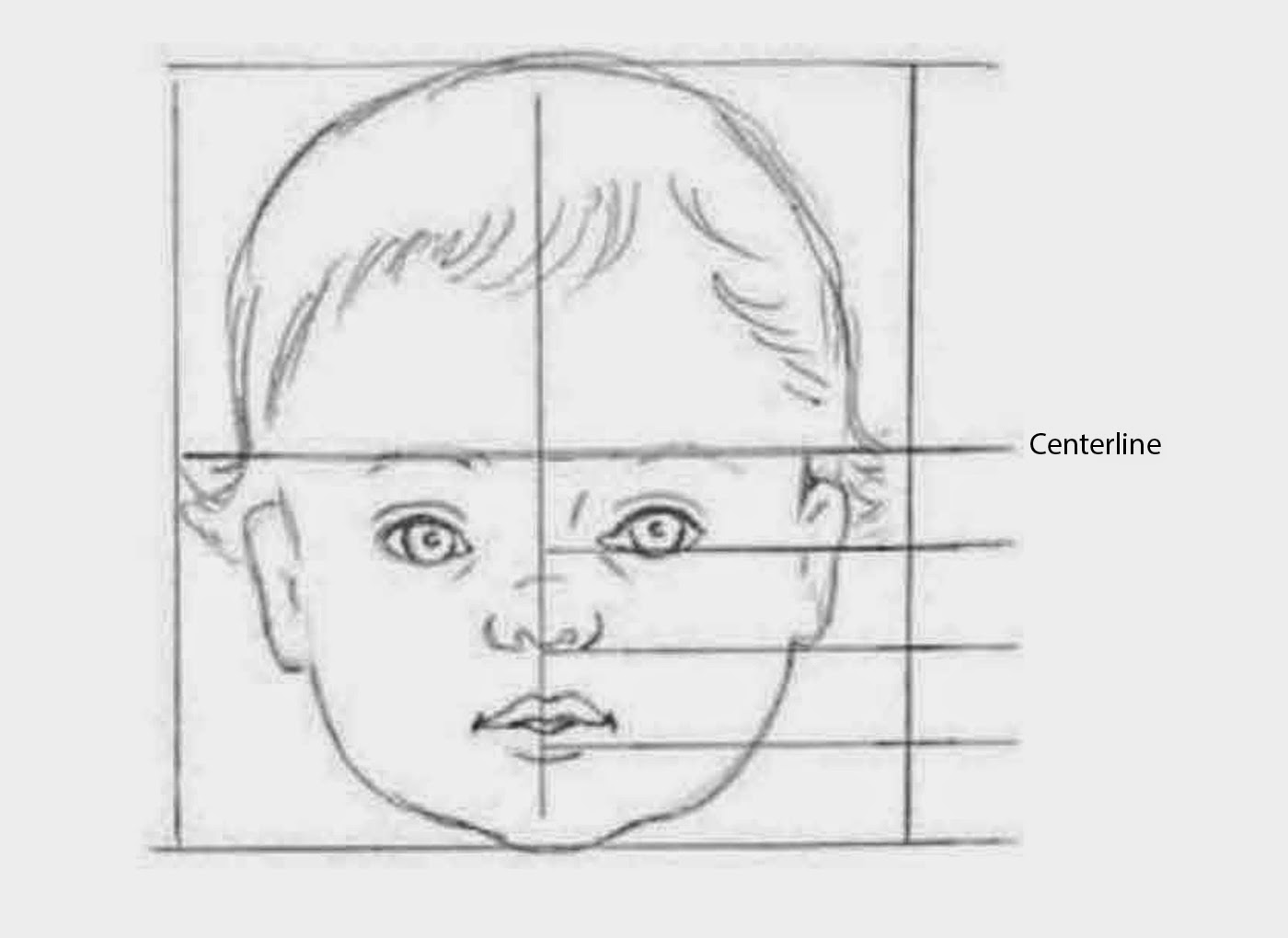 Drawing an Infant A baby's head fits into a square shape, as shown here. Babies have larger foreheads than adults do, so their eyebrows (not their eyes) fall on the horizontal center line. Their eyes are large in relation to the rest of their features because the eyes are already fully developed at birth. 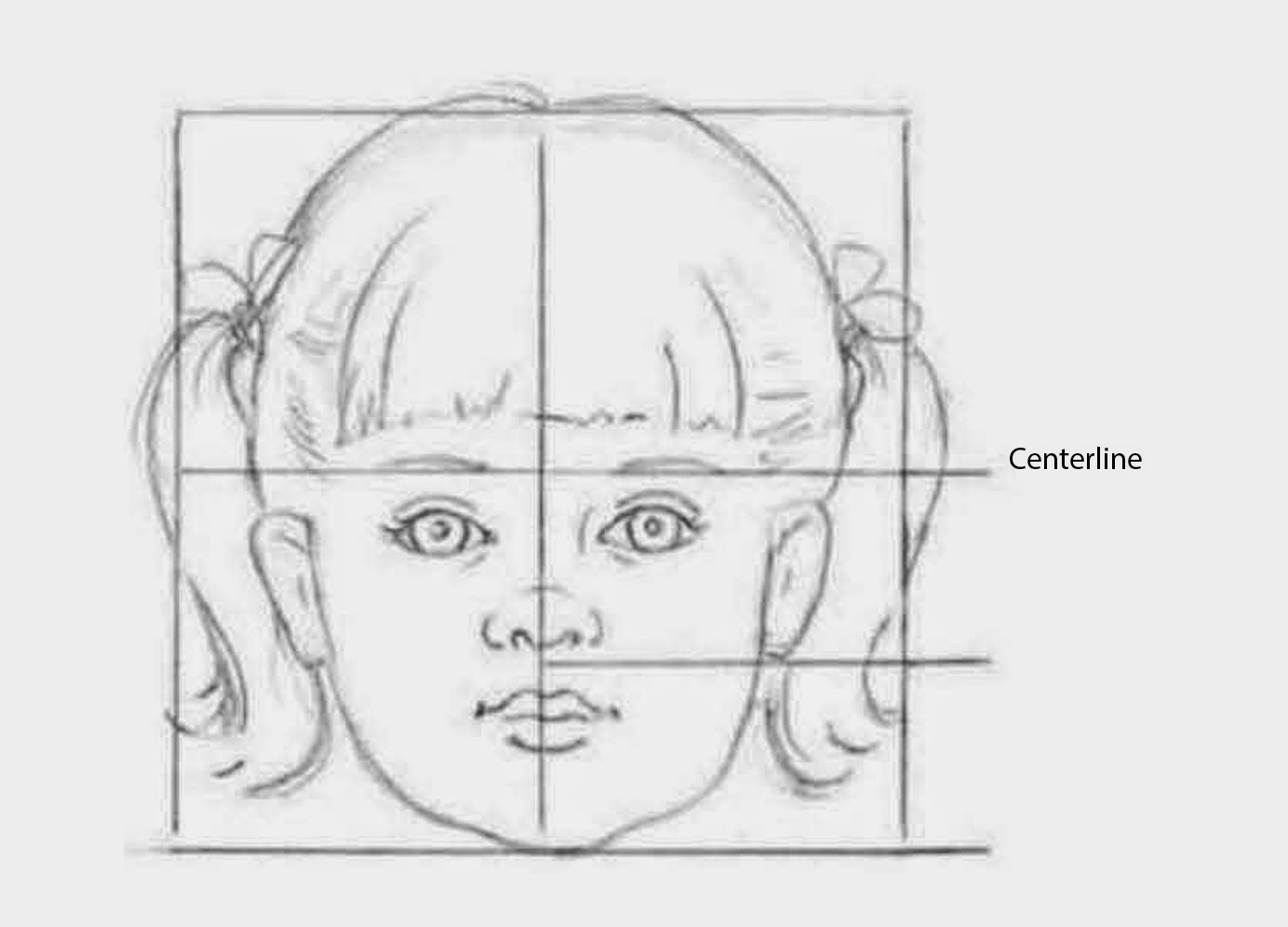 Drawing a Toddler As a child grows, the forehead shortens a bit and the chin elongates, so the bottoms of the eyebrows now meet the horizontal center line. The eyes are still more than one eye-width apart, but they are bit closer together than an infant's eyes are. 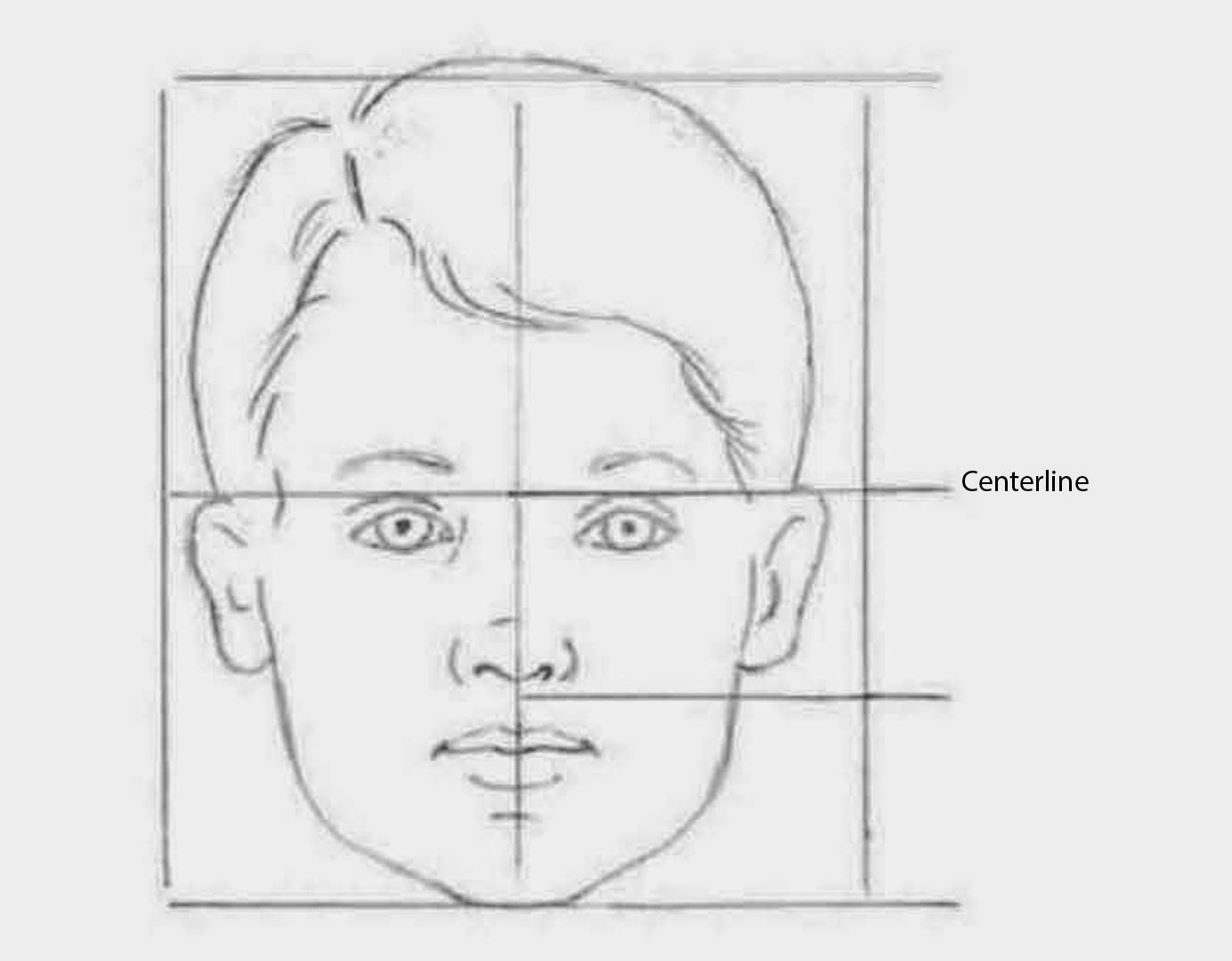 Drawing a Child As a child nears seven or eight years of age, the face has lengthened and fits into more of a rectangular shape. The eyebrows are now well above the horizontal center line and the eyes are a little closer to the center line. The ears line up with the bottom of the nose. 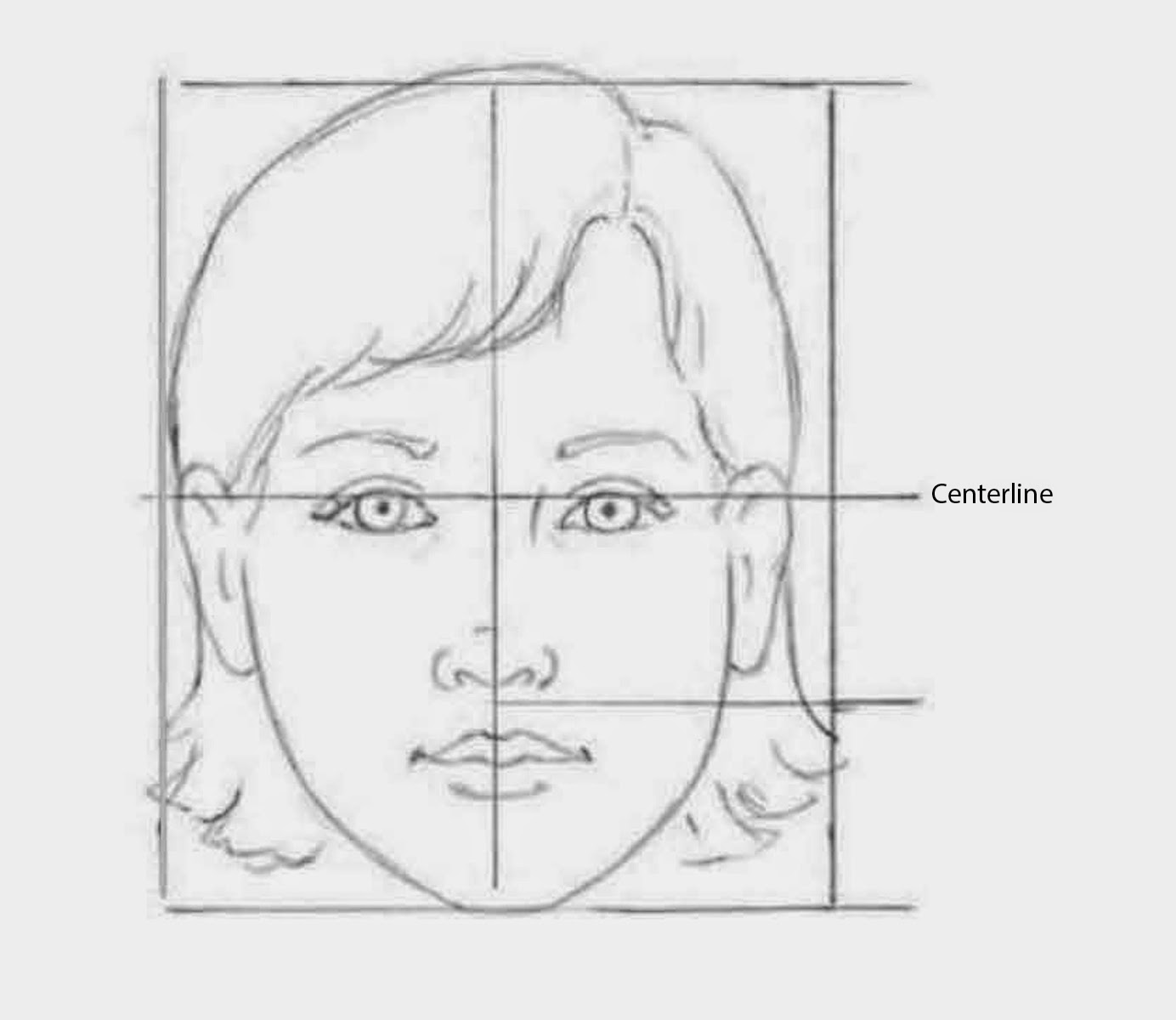 Drawing a Teenager By age 13, the face is even longer and has lost most of its round shape; now it's more oval. The eyes are nearly at the center line, as on an adult's face, but a teen's face and eyes are still slightly more rounded and full. The tops of the ears are about even with the eyebrows. 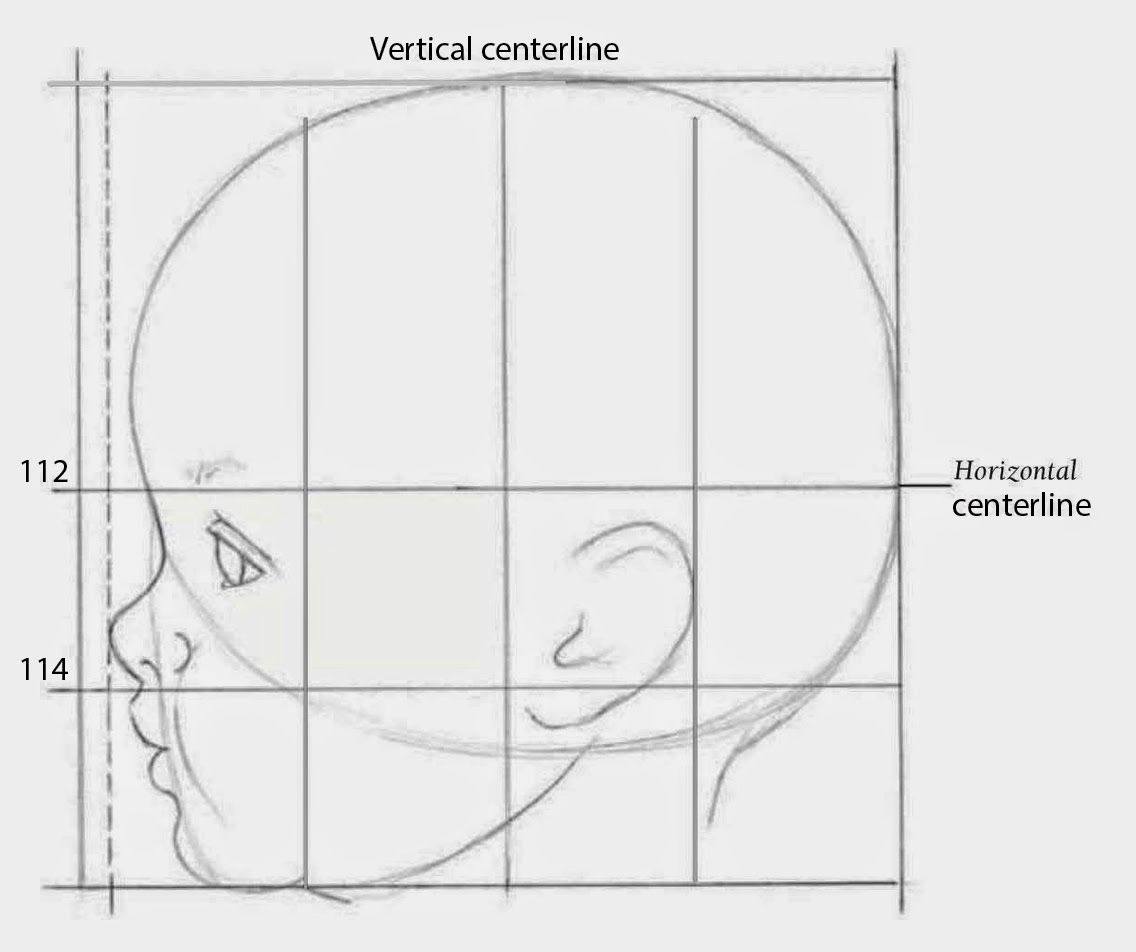 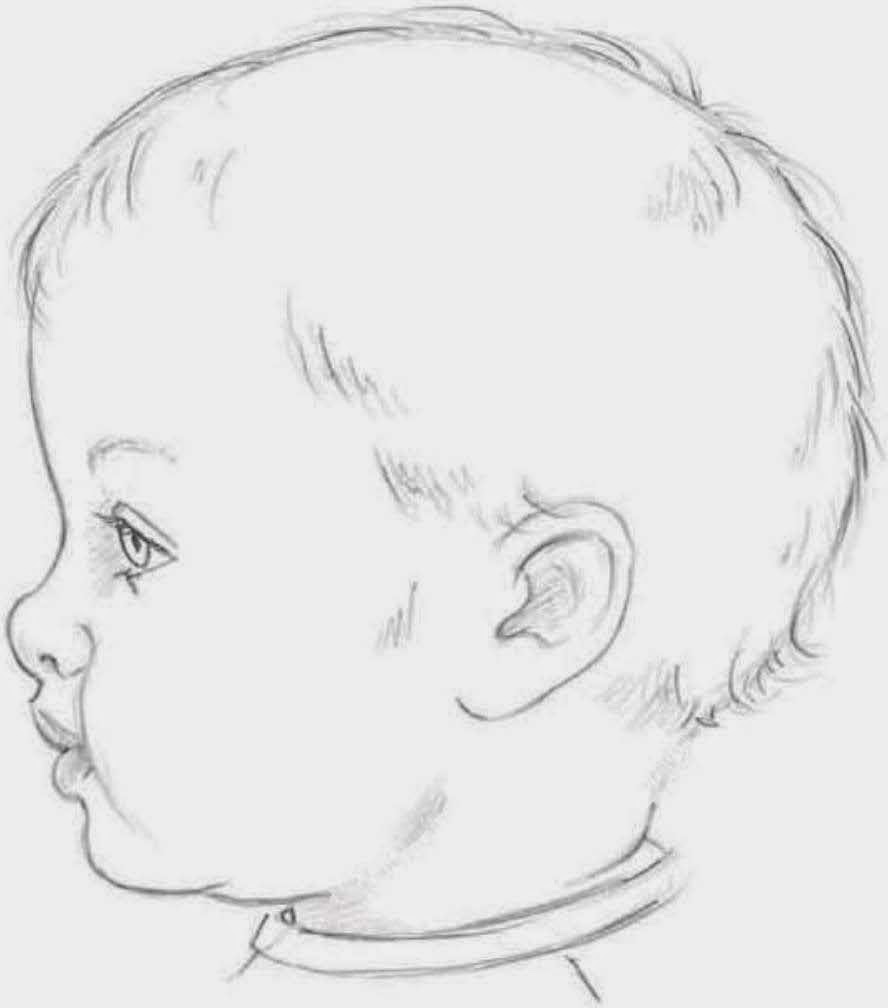 Drawing a Baby in Profile The profile of a child usually is very rounded. Youngsters generally have bigger, more protruding foreheads than adults do. And children's noses tend to be smaller and more rounded, as well. The shape of a baby's head in profile also fits into a square. Block in the large cranial mass with a circle; then sketch the features. The brow line is at the horizontal center line, whereas the nose is about one·fourth of the way up the face. Study where each feature falls in relation to the dividing lines. In addition, light eyebrows and wispy hair help indicate a baby's age; as children get older, their hair grows in thicker. 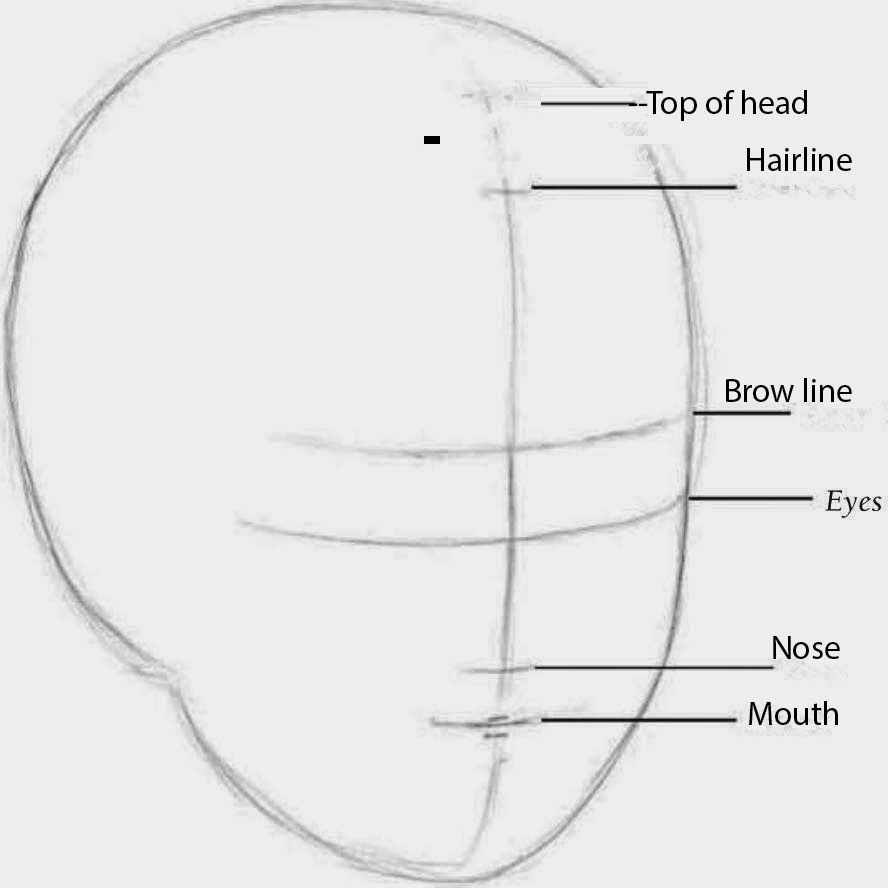 Adding Children's Details The features shift slightly in a three·quarter view, as shown here. Although a baby's features are placed differently on the head than an older child's are, their facial guidelines shift similarly, following the direction in which the head turns. Place the features according to the guidelines. Hair style and clothing-including access· rise-also can influence the perceived age of your subject!

MODIFYING THE PROFILE
As children age, their profiles change quite a bit. The head elongates at each stage: The top of the baby's eyebrow lines up with the bottom of the toddler's eyebrow, the midway·point between the young boy's eyebrow and eyelid, and the top of the teenage girl's eyelid.

Posted by Nabeel majeed shaikh at 11:46